ASSETS Executive Director Jessica King recently published an article in the Lancaster Newspaper titled “It’s going to take all of us to alleviate poverty here”. 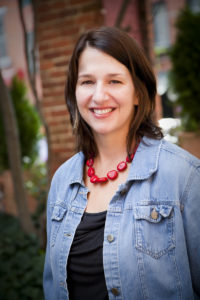 There are innovative and accessible approaches to reducing poverty in a city our size, but to end poverty, we have to want to do so.

Do we truly believe that people are poor for reasons beyond their own choosing? Do we believe that those who are poor (who are disproportionately people of color in Lancaster’s case, and in many cases across our country) deserve better?

While of course not all people of color are poor and not all those in poverty are people of color, at least in our context, race and class are often linked.Lancaster cannot address its poverty issue until it acknowledges its race issue.

When I first saw the chart in the study by Franklin & Marshall College’s Floyd Institute for Public Policy showing median income by race, I cried.

Our neighbors of color earn virtually half of what whites do in this county. This kind of disparity cannot develop without systems at play that are bigger than personal choice.

How about when hundreds of white folks in pickup trucks intentionally, blatantly, repeatedly parade a symbol of white supremacy in mass “rebel runs”? Today. In 2015. Fifty years after the civil rights movement.

For more thinly veiled racism, check out the comments that will surely be posted in reply to this article on LancasterOnline.

We have a complex history around race and class. People are prone to believe that those in poverty in the U.S. are poor primarily due to personal choice.

In reality, poverty stems from multiple roots — with personal behavior a limited cause.

More culpable, but harder to pin down, are conditions including generational poverty and concentrated poverty; exploitation of those in poverty; and political and economic conditions that create and sustain poverty.

These systems and conditions disproportionally and unfairly impact people of color. This has to be part of the conversation.

Again, there are innovative approaches we can follow to address these systemic roots of inequality. Greater equality creates stronger societies with superior quality of life for all, but we have to want it.

Compared to the rest of the world, the U.S. is one of the richest nations and the most plagued with health and social problems. Why? Due to the extreme level of inequity between rich and poor. Why do we have this level of poverty? Because we don’t care enough to end it.

We are the first generation in the history of civilization that needs to find new answers to how we improve the real quality of human life. Will we?

This is truly a regional issue — not just Lancaster city’s.

Our 30 percent poverty rate outpaces Philadelphia’s 26 percent and Pittsburgh’s 23 percent but is lower than the poverty rates in Harrisburg, York and Reading. Ours is a regional challenge, and we won’t solve it unless we have a coordinated approach, with buy-in across the city-county divide.

This isn’t going away, so why don’t we do something positive to tackle it?

So where are some areas of hope?

I am tremendously encouraged by my neighbors in the City of Lancaster and other organizations engaged in this work. As a lifelong Mennonite who was inspired by Jesus’ teaching around both love and money from an early age, I hold some hope that Lancaster County’s significant faith-based population might have a different capacity to lead the way on this work in the face of haters flying Confederate flags and online trolls.

This is the work of loving our neighbors as ourselves — and it is desperately needed.

But we need to start with the personal. Mennonite Central Committee’s Roots of Justice, YWCA Lancaster, the Lancaster Theological Seminary and ASSETS’ Women’s Leadership Circles all do excellent work helping people — especially whites — to look inward and systemically in regard to anti-oppression and anti-racism.

If you want to help reduce Lancaster’s untenable 30 percent poverty rate, one of these trainings should be a prerequisite. Don’t be afraid. Don’t let the paralyzing cocktail of confusion, guilt and fear (plus a dose of comfort) stop you from digging in.

The work becomes clearer in many ways after you take that first step. If you want to critique or disagree, take that step first and see where you are when you come out.

I’ll save most of my tactical poverty-alleviation ideas for later, but what might happen if just a few landlords, instead of raising rents with rapidly escalating prices in Lancaster city, would pledge to charge 30 percent of the renter’s monthly income (the definition of affordable housing)?

What if a few aligned business owners would hire one more employee at a livable wage or convert their lowest paid workers to a thriving wage?

What if one or two Lancaster County municipalities would develop higher density, mixed-income housing in their communities and thereby further integration?

What if our elected officials would push for an expansion of the Earned Income Tax Credit to put more cash into the hands of the working poor?

What if every person who wanted to move out of poverty was matched with a team of allies to support them?

There are so many things we can do to address this problem, but we have to want to first.

Jessica King is executive director of ASSETS, an organization that seeks to create economic opportunity and cultivate entrepreneurial leadership in order to alleviate poverty and build vibrant, sustainable communities. She lives with her husband and two daughters in southeast Lancaster city.