WRITTEN BY BY DAVID A. KOSTIVAL 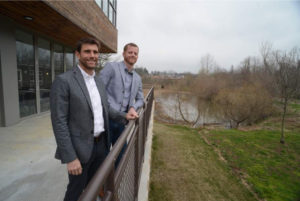 Sustainability in business is a commonly heard phrase to suggest a workplace should encourage environmentally friendly practices.

But the word in its broader definition means that businesses also need to be socially sustainable, said Jonathan Coleman, interim co-executive director of ASSETS, Lancaster.

Coleman spoke Thursday at a program co-sponsored by Berks Nature and Penn State Berks. The event was held at The Nature Place in Angelica Park.

“We take a holistic view of what sustainability means, and that is being environmentally, socially and economically sustainable,” Coleman said. “We envision an equitable, ethical and prosperous economy that works for everyone. Businesses should play a more vital role in helping economies and ecosystems thrive.”

Coleman said ASSETS has programs which focus on entrepreneurship, as well as resources to help existing businesses grow their impact and sustainability.

Coleman used his home-base of Lancaster as an example of what he called a system failure.

Even though the city has experienced a revitalization of its downtown, it has also seen an increased poverty rate and a need for more businesses which are owned by women and people of color.

“The community has a rising tide, but a rising tide lifts all boats and way too many get stuck in the mud,” Coleman said. “There are negative environmental outcomes of economic success.”

Coleman quoted Larry Fink, CEO of BlackRock, an American investment management corporation, who wrote a letter to his investors saying: “To prosper over time, every company must not only deliver financial performance but also show how it makes a positive contribution to society.”

Coleman said business-as-usual has not worked and that businesses need to think outside of the box.

“We help businesses take high level thought and move it into action,” Coleman said. “Good businesses operate with a triple bottom line of how they can impact profit, people and the planet.”

Craig Dalen, director of impact business strategy at ASSETS, explained that businesses shouldn’t be profiting while the communities around them are failing.

Dalen said companies should seek to be different to have a competitive advantage and cited the example of Patagonia.

“Patagonia differentiates itself from other outdoor retailers who haven’t made a push for an environmental advocacy,” Dalen said. “Brands which create a different narrative in the marketplace will attract values-based customers. Be proactive in your approach; create a niche in your marketplace and tell a different story.”

Dalen said businesses worldwide are taking what is known as a B impact assessment, which is an assessment to look inside business models.

Businesses can take advantage of this free assessment tool by visiting www.bimpactassessment.net/assets.

“We can self-regulate ourselves in order to create more value over time,” Dalen said. “The virtuous part is that business grows and the cycle perpetuates itself.”

“A nature-inspired road map could help you and your business disrupt traditional industries,” Dalen added. “Research shows that businesses which start prioritizing values to its stakeholders start to realize long-term benefits.”

But those values would also include such things as investing in a workforce with barriers or providing incentives to employees that typically leave after a certain amount of time.

“That is investing in a community to tell a different story,” Dalen said.

Coleman said it’s about creating ecosystems for truly sustainable business in the community.

“We want to merge business concepts with social and economic concerns,” Coleman said.

“Lancaster is a city revitalized and we (ASSETS) are cleaning up the messes,” Coleman said. “Reading is a bit behind other cities when it comes to revitalization, so it has an opportunity to do things right from the beginning.”

Coleman said ASSETS would like to become involved with businesses in Berks County to give them tools and resources to create more equitable and sustainable business models.